Bottles led the Ladyjacks to its best start since 1992; Hilbun earns all-tournament honors

Bottles was key in leading the Ladyjacks to a perfect 4-0 mark over the weekend at the Georgia Southern Spring Hill Suites Invitational, guiding Stephen F. Austin to its first 4-0 start since 1992. The Rowlett, Texas, native hit better than .440 in the final three matches of the tournament and averaged 4.09 kills per set in those wins. The SFA middle blocker finished the weekend hitting a .336 clip and averaging 3.19 kills per set. Bottles hit .577 and notched 16 kills and three blocks in a four-set win over Jacksonville before backing that up with a 14-kill performance in a sweep of South Dakota State. In the final match of the tournament against Montana State, the senior hit .323 with 15 kills in the four-set victory.

Hilbun made a huge impact for the Bobcats defensively at the net and in the back row while earning a spot on the all-tournament team at the Bama Bash in Tuscaloosa, Ala. The sophomore middle blocker totaled 23 blocks in three tournament matches for an average of 1.77 blocks per set and also contributed with 27 digs for an average of 2.08 digs per set. The Austin, Texas, native flirted with triple-doubles in each of the first two matches for Texas State, finishing with 13 digs, nine blocks and nine kills in the season-opener against Alabama State before posting nine kills, nine digs and eight blocks against Austin Peay.

HOUSTON, TEXAS (August 28, 2011) In an effort to help fans enjoy gameday to the fullest, the University of Houston Department of Intercollegiate Athletics has taken numerous steps to beat the heat at the Sept. 3 contest vs. UCLA.

"It is extremely important to this athletic department to provide a safe and enjoyable environment for our fans," UH Director of Athletics Mack Rhoades. "We want anyone who visits Robertson Stadium to feel appreciated for spending their day with the Cougars."

What UH will Provide
• For the UCLA game only, fans will have the ability to bring in an unopened, clear plastic bottle of water, one per person.

• The UH Department of Intercollegiate Athletics will be handing out "Buy One, Get One Free" coupons for cold water upon ticketed entry to Robertson Stadium.

• UH Dining Services will have three times the amount of water product normally sold as well as dedicated water stations to service patrons.

• Water misting cooling zones will be stationed in the four corners of the Stadium underneath the concourses inside Gates 1, 7, 8, 14.

• UH Dining Services will sell cups of ice for $1 from beverage-only concession stations.

• A guest assist text service is available for fans who feel faint or ill in their seats. Personnel will assist in getting fans to the treatment areas. Text "UH" and message to 78247.


* UH will have on-site medical personnel to assist with any heat-related cases.

A Houston Texans Win over the San Francisco 49ers Means What? 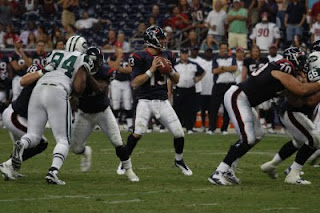 HOUSTON, TEXAS (August 27, 2011) The Houston Texans will travel to the west coast on Saturday to take on the San Francisco 49ers at Candlestick Park in the third preseason game of the 2011 season for both teams.

This will be the last game before both teams must cut their roster to 75 players on Aug. 30.

Let's see what a win over the 49ers would mean for the Texans.

Let's see if the Texans can make it 3-0 in preseason games.

Was the Houston Texans' Defense the Key in Their 27-14 over the New Orleans Saints? 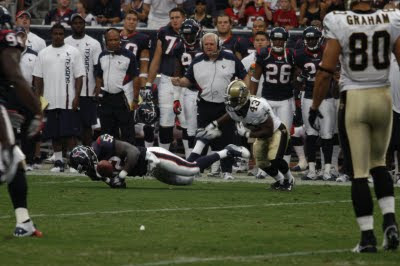 HOUSTON, TEXAS (August 20, 2011) Was the defense in the key in the Houston Texans' 27-14 drumming of the New Orleans Saints, taking their 2011 preseason record to 2-0 or did the offense just put more points on the scoreboard than the Saints?

Much has been written about Wade Phillips and 3-4 defense he has installed as defensive coordinator of the Texans.

In the post game interview, head coach Gary Kubiak was quoted on the Texans' defense:

I know they gave up a lot of yards but they made some big plays. The first drive of the game they (New Orleans Saints) go right down the field on them. You can get the ball moved on you defensively but if you step up and make a big play that's what it's all about and that's what they did. Antonio (Smith) made that big play early in the game that kind of flipped their emotions of the the game and got everybody going but I know we gave up too many yards and we got a lot of things to fix so we've got a long way to go.

That about says it all.

The defense was not a clean and concise as everyone would like to see, but remember this is just preseason.

When New Orleans quarterback Drew Brees was sacked by Smith, ending the Saints drive, that was one of the big plays Kubiak was talking about.

That sack was the Texans' eighth of the season, which matched the team's total from the 2010 preseason.

Mario Williams, who was playing in his new outside linebacker position, recovered the fumble.

These are the things that can turn around a team and take them onward throughout the season.

In fact, 21 defensive players contributed to the Texans' 43 tackles with nine players assisting on tackles.

The Texans' also had four sack, with outside linebacker Brooks Reed accounting for two of them.

It was obvious from the press box, at least to me, that the defense line needed to buckle down and do a better job of shutting down the run.

The Saints rushed for 113 yards and although that was less that the Texans (208 yards), they were not getting the job done on the run.

The same could be said about the secondary, as the Saints threw for 218 yards which was pretty even to the Texans (228 yards).

However I think defensive, the Texans need to build their confidence and continue to embrace the defense scheme that Phillips whats to develop.

I also believe the Texans concentrated too much on defending against the pass, knowing Brees was going to go to the air.

As a result, the Saints were able to gain yardage on some big runs.

As I see it, the Texans' need to play better against the run and let the passes happen. If they can become a team that shuts down the run, then their opponents will be forced to go to the air.

I saw good things out of outside linebacker Brooks Reed against the Saints. He had two solo and one assisted tackle and seemed to be learning the defense better.

Coming out of college, he was used to playing a 4-3 defense and now he has to make a complete switch to the 3-4.

I think he will continue to mature and will make a good addition to the Texans.

Defense end J.J. Watt also stepped up and played better this week than he did against the New York Jets.

He had a single tackle, but did seem to get into the game a bit better.

In addition, he needs to stay at the line a bit more and work against the block. He is improving, and with three more weeks until the regular seasons starts, he will get better and better.

I think this win over the Saints was a needed victory, but the true test will come when the regular season starts.

When the Texans take to the field on Sept. 11 against the Indianapolis Colts, things will be different.

Their two (and possibly two more) preseason wins will just be a memory.

Overall, the Texans' defense is coming along, but they still have a long way to go.
Posted by TexSport Publications at 8/20/2011 11:39:00 PM No comments: Links to this post 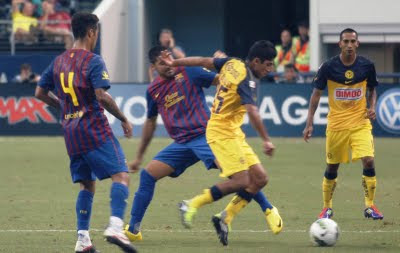 ARLINGTON, TEXAS (August 6, 2011) In a soccer match, it is necessary to control the ball to win, and that is exactly what FC Barcelona did in the final match of the 2011 World Football Challenge.

FCB stunned Club America, winning the match 2-0 on goals by David Villa and Seydou Keita in front of 60,807 fans at Cowboy Stadium in Arlington, Texas.

Barcelona controlled the ball more than 70% of the game, and it appeared that “Águilas” never got into the match.

Villa put Barcelona on the scoreboard in the 24th minute on a nice shot from the front of the goal. He received the ball from Adriano Correia to get his first goal of the tournament.

Barcelona picked up their second goal of the match in the 90th minute when Keita receive a short pass from Gerard Deulofeo inside the box and slid it in for the score.

The match was virtually all Barcelona with the Spaniards having the advantage on shots (15-9), shots on goal (7-4), and corner kicks (8-4).

Barcelona finished the tournament with a 1-2-0 record (3 points) while Club America ends up without a win or tie.
Posted by TexSport Publications at 8/06/2011 05:37:00 PM No comments: Links to this post