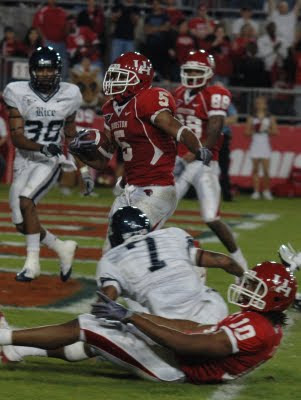 The Cougars, who bolted out to a 24-0 lead at the end of the first quarter and increased their lead to 59-0 at the half, never was challenged by Rice in winning the Conference USA West title.

Houston’s junior quarterback Case Keenum, a finalist for the Davey O’Brien Award, went 24 for 31 and 323 yards in the air with two touchdowns. He also rushed for 8 yards and scored one touchdown on a 1-yard run with 10:10 to go in the first quarter.

Keenum left the second half to his backups, Cotton Turner and Austin Elrod. Turner went 6 for 8 and 52 yards passing with 1 touchdown; while Elrod rushed for 16 yards on 3 carries.

Rice never seemed to get into the offensive end of the game until the second half, when the Cougars virtually cleared their bench to allow players down on the depth chart a chance to play.

In fact, Houston ran off a string of 66 unanswered points before Rice could get on the board. Rice finally scored with 9:00 left in the 3rd quarter on an 11-yard run by Charles Ross to take the score to 66-7.

Houston head coach Kevin Sumlin was quoted in saying his players knew how important the game was. “Everyone knew what was at stake here tonight from a big-picture standpoint. The more you can reduce things to feelings about rivalry games, the more I think it helps the guys focus a little better. Our guys came out today and showed how important this game is to them.”

Sumlin was further quoted “This was one of our primary goals – to win the West. We haven’t been perfect but we’ve gotten better and have gone through quite a bit but our guys keep fighting,” Sumlin said. “They have put our team in a position to win a championship and as a coach and program, that’s where you want to be. The only way to do that is to win games. These guys have fought to do that and that’s where we’re at right now but the season isn’t over yet.”

Now it is off to Greenville, North Carolina to face the East Carolina Pirates (8-4 overall, 7-1 Conference USA) on Saturday, December 5 at Dowdy-Ficklen Stadium for the 2009 Conference USA Football Championship.
Posted by TexSport Publications at 11/28/2009 10:35:00 PM No comments:

HOUSTON, TEXAS (November 28, 2009) The #20 Houston Cougars face off on Saturday night against their cross town rivals, the Rice Owls, in their annual battle for the “Bayou Bucket.”

The Houston-Rice game is the longest running series in Houston football history.

This will be the 36th meeting between the two rivals, and is only one of two Football Bowl Subdivisions rivalries that pit two schools from the same city. The only other same city ribvalies is USC-UCLA.

Houston boosts 25 victories over Rice and is the most the Cougars have against any other teams in its 64-year history.

The Cougars have won three straight at home in the series and have a 4-1 mark over the Owls in Robertson Stadium.

The two teams faced off in the debut of John O’Quinn Field on September 4, 1999 and the Cougars have recorded a 3-1 record versus the Owls while members of Conference USA.

Houston also holds a 16-4 mark over the Owls while a member if the now defunct Southwest Conference.

The Cougars also hold the longest winning streak in the series; a six-game sets from 1987-1992

This game marks the 15th time the Cougars and Owls have met in their season finale for both squads.
Posted by TexSport Publications at 11/28/2009 06:44:00 PM No comments:

Rice Beats No. 17 LSU in Volleyball

HOUSTON, TEXAS (November 27, 2009) All-Conference USA setter Meredith Schamun posted a remarkable 51 assists (17.0 assists per set) in leading the Rice Owls volleyball team to a 3-0 sweep over No. 17 LSU in front of 1,063 fans inside Tudor Fieldhouse. Rice’s victory was its ninth in a row and its first over an AVCA top 25 ranked team since Sept. 9, 2006, when the Owls defeated 21st-ranked University of Arizona 3-2 in Tucson, Ariz.

The Owls, after earning Conference USA’s NCAA automatic bid last weekend by winning the C-USA tournament title, will learn where it plays its NCAA first round match via ESPNNews on Sunday at 2 p.m. (Central).

Rice was led by Natalie Bogan’s 14 kills and .367 hitting percentage, while Ashleigh McCord had 13 kills. Jessie Boulavsky hit a match-high .500 attack percentage with 10 kills. Freshman Nancy Cole also had 10 kills and a .474 attack percentage. Two-time C-USA Libero of the Year Tracey Lam had a match-high 21 digs, while Jenn McClean had 19 digs to go with 9 kills. Megan White also had 12 digs and Channing Grigsby dug up 8 digs

Marina Skender led the Tigers with 13 kills and Brittnee Cooper had 11 kills and a .409 attack percentage.

In an exciting first set, Rice rallied from a four-point deficit (18-14) to tie it at 23-23. The Owls then fought off LSU set point at 24-23 and had three set points of their own before winning 32-30. A kill by Nancy Cole gave Rice a 31-30 lead and the ensuing LSU hitting error gave the Owls the win.

Rice had 22 kills and was led Ashleigh McCord’s 7 kills. Natalie Bogan had 5 kills and the aforementioned Cole had 4 kills.

Set three saw LSU forge an early 6-3 lead, but Rice hung tough and tied it at 9 on a kill by Bogan. It was 14-14 when the Owls outscored LSU 4 to 1 to take a 19 lead that it would not relinquish. Rice was the beneficiary of two LSU errors and then tallied kills, one by McClean and two by Jessie Boulavsky in the mini-run. At 24-20, a kill by McCord sealed the victory.

Boulavsky and Bogan led Rice in the decisive set with 5 kills each as the Owls totaled 17 kills and a .455 hitting percentage.

"It was good to see our men remain undefeated," TCU head coach Richard Sybesma
said. "This puts us in good shape within the conference and I saw some good
things from our women today as well."

TCU’s men’s squad dominated the Cowboys, garnering victories in 13 of the 16
events. The Frogs were led by sophomores Edgar Crespo and Laszlo Gyurko, as each
tallied four wins, including a pair of relay victories.

After spending the week in Sucre, Boliva, representing his native country of
Panama at the 2009 Bolivarian Games, Crespo swept the breaststroke events,
clocking in with a time of 55.84 in the 100-breast, while pacing the field with
a lifetime-best clocking in the 200-breast at 2:02.55. His 100-breast time
serves as the third-best in TCU history. The Panama City native has failed to
lose a race this season, improving to 14-0 for the season with nine relay
medals.

Juniors Edgar Peyro and Jeff Gettel didn’t get left out, each claiming wins
Friday. Gettel continued his supremacy in the backstroke events, earning a
100-back win with his personal-best time of 50.17, while also garnering the
200-back title in 1:49.96. Peyro ripped ahead of the pack in the 100-fly with a
career-best time of 50.43.

Junior diver Kyle Callens also resumed his reign from the sky, sweeping the
springboard events. Coming off his second Mountain West Conference Male Diver of
the Week performance in San Diego, Callens besting both of his season-opening
scores Friday with a score of 336.07 on the one-meter, followed by a remarkable
362.85 mark from the three-meter dive. His three-meter output sits as his best
performance from that height and ranks second all-time in Horned Frog history,
while his one-meter dive lists as the third-best score for TCU.

TCU’s relay squads served as perfect bookends to the afternoon, swimming the
fastest times of the year. To start the meet, the team of Gyurko, Crespo, Peyro
and Bagby torched through the 200-medley relay (1:31.56), while Crespo, freshman
Devin Price, Gyurko and Bagby rounded out the evening with a 3:05.91 timing in
the 400-free relay.

On the women’s side, senior Stephanie Futscher maintained her dominance in the
200-fly, leading the way with a time of 2:05.57. After setting the TCU record
for the 200-fly at the 2009 MWC Championships, the Irving, Texas product has
gotten off to a 4-0 in the event to start the season.

The Frogs will now prepare to send members to the U.S. Short Course National
Championships in Federal Way, Wash., Dec. 3-6, while the divers will make a trip
to Austin, Texas for the Texas Invitational.
Posted by TexSport Publications at 11/22/2009 10:04:00 AM No comments:

HOUSTON, TEXAS (November 21, 2009) With four players in double-figures in kills, the fourth-seeded Rice Owls volleyball team steam rolled number one seed Southern Miss 3-1 in a semi-final match of the Conference USA Volleyball Championship in Rice’s Tudor Fieldhouse. With the victory, the Owls now meet Tulsa in the championship match on Sunday at 1 p.m. It is Rice’s first-ever appearance the C-USA championship final which will be shown on CBS College Sports. Tulsa advanced to the final with a 3-0 win over Tulane.

Setter Meredith Schamun directed Owl offense and she racked up a match-high 42 assists and 9 digs. Owl libéro Tracy Lam had a match-high 25 digs (6.25 digs per set average) and even 2 kills.

Today’s win was the result of a complete team-effort on Rice’s part.

“It was the ultimate team win and our defense we really came through and that’s been keeping us going the whole time as it has always been strong,” said Rice head coach Genny Volpe. “But today, we were not only digging balls up we were making the plays, the smart plays to finish off the point.”

“I thought Rice completely outplayed us,” commented C-USA Coach of the Year Southern Miss’ Ricci Luyties. “They outhustled us and they were the better team today by far. They kept the pressure on us, they were hustling, and getting balls up that I think our girls weren’t expecting them to and (consequently) got frustrated.”

In set one, the Owls started off with a 4-2 lead and did not let up. Rice was even up 20 to 10 with five of Southern Miss’ points coming from five Rice service errors. USM staged a mini-comeback to cut the deficit to 20-14, before an Ashleigh McCord kill ended the run and catapulted Rice to a 25-16 win.

Jessie Boulavsky led the Owls with 5 kills and Meredith Schamun had 14 assists.

Bogan and McCord had 4 kills for Rice. Schamun posted 13 assists and Lam led the Owl defense with 10 digs.

The Owls kept the pressure up in set four with an early 8-5 lead, but that would be as close as it would get. Rice extended that lead to 18 to 9 and then kept the train of pain rollin’ for a 25-13 win. 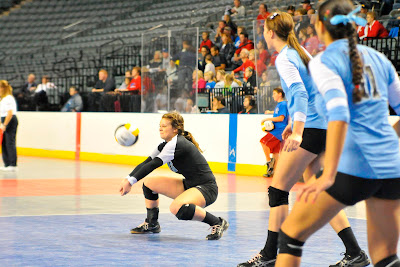 COUNCIL BLUFFS, IOWA (November 20, 2009) On the second day of the National Junior College Athletic Association (NJCAA) volleyball tournament, San Jacinto College rebounded from a first-round loss with a straight-set win over Wallace State, and 3-2 victory over Northwest College, Friday, at the Mid-America Center.

San Jac will play for ninth place on Saturday at noon against Hutchinson Community College (Kan.).

For a list of radio stations that carry the show click here www.boxtorow.com/affiliates.php. The show can be heard on-line Saturdays from 1 - 2 p.m. CT at www.boxtorow.com. Click on the LISTEN LIVE link.