HOUSTON, TEXAS (February 25, 2011) Friday night, the University of Houston’s Cougar Field saw a battle of the undefeated as the Houston Cougars (4-1, 0-0 C-USA) faced off against the University of Mississippi Rebels (6-0, 0-0 SEC).

The Rebels got on the scoreboard first when Alex Yarbrough doubled down the left field line, scoring Tanner Mathis from second, making the score 1-0.

They scored again in the second inning when Mathis hit a sacrifice fly to left field allowing Zack Kirksey to score on the throw.

Ole Miss added another run in the fourth when Mathis got on base on a fielders choice, advancing Preston Overbey from third to home.

The Cougars finally got on the board in the bottom of the sixth when Chase Jensen singles to the third base side, allowing John Cannon scores to score from third.

They added another run on a bases-loaded walk by Caleb Ramsey, scoring Landon Appling.

Ole Miss got back their two-run lead in the top of the seventh when Yarborough singled to left center field, scoring Blake Newalu from second.

The Cougars never could get their bats connecting, recording seven hits in the game while committing two errors.

Appling went 2 for 3 with one run for the Cougars while Newalu went 3 for 4 for Ole Miss.

Matt Crouse got the win, giving up six hits, striking out eight while walking a single batter. He is now 2-0 on the season.

Codey Morehouse took the loss, giving up three runs on five hits. He goes to 1-1 on the season.

Both teams will face off again in game two of the three-game series on Saturday evening with a 7:00pm start.

HOUSTON, TEXAS (February 16, 2011) The 2011 University of Houston baseball season will kick-off at 6:30 p.m. Friday night at Cougar Field, as the Cougars play host to UT Arlington in a three-game series. The weekend will continue against the Mavericks at 6:30 p.m. Saturday and conclude at 1 p.m.Sunday

Fans can hear all three of this weekend’s games live on UHCougars.com and livestats will also be available via the internet by clicking on the Gametracker link on the baseball schedule page.

The first 250 fans that arrive for Friday’s game will receive an official 2011 Houston Baseball poster or schedule card.

Single game tickets are still on sale beginning at $8 for general admission. A season ticket package for all 27 home games is also still available for $165. Tickets can be purchased at the Houston Athletics Ticket Office in the Athletics/Alumni Center or on the phone at 713-GO-COOGS (462-6647) Monday-Friday from 8 a.m. to 5 p.m., or online at www.UHCougars.com.

The gates and the ticket booth will be open one hour prior to the start of the game.

The Cougars are under the direction of first-year head coach Todd Whitting, who rejoined the program after spending seven seasons as an assistant coach at TCU.

Whitting has tabbed junior RHP Codey Morehouse as his opening day starter. Morehouse made 14 appearances on the mound last season, all in relief. He finished with a 9.50 ERA and one save. He will face off against the Mavericks’ RHP Collin Reynolds, a junior college transfer playing his first game for UTA.

Saturday’s contest will mark junior lefty Jordan Lewis’ first start as a Cougar. He transferred to UH from West Nevada Junior College. There he guided his team to a third place finish at the Junior College World Series and was named a First-Team All-Conference selection. RHP Lance Day will be making the start in his first game with the Mavericks.

Neither team has named a starter for Sunday’s series finale.

The Cougars will meet UT Arlington for the seventh time in program history on Friday. UH holds a 5-1 all-time record in the series with a 4-0 mark at Cougar Field. Houston earned an 8-3 win in the last meeting between the two programs on Feb. 24, 2007 at the Southwest Diamond Classic. 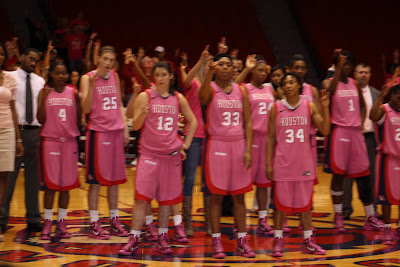 Led by Brittany Scott’s 20 points and five rebounds, the Lady Cougars started slow, scoring only nine points in the first nine minutes of the game. They fell behind 11-9 at the 11:18 mark of the first half, but quickly tied the game 11-all with 9:35 left in the first half.

From that point, it was Houston all the way; leading 36-27 at the half while building on their lead in the second half.

The Cougars had three other players in double digits; Porsche Landry with 16, followed by Lesslee Mason with 12 and Jasmine Johnson with 11.

Mason scored her fifth double-double of the season with her 12 points and 11 rebounds. He last double-double was against SMU on Jan. 30.

The Pirates were led by Ashley Clark with 11 points and 12 rebounds.

The Cougars will next face Tulsa on the road on February 17 with a 7:30pm start before returning to the friendly confines of Hofheinz Pavilion on February 20 for a 2:00pm game with UTEP.
Posted by TexSport Publications at 2/13/2011 04:21:00 PM No comments: Links to this post

The Cougars and Pirates are meeting for the 10th time since 2002, as Houston
holds an 8-1 advantage in the series. The Cougars are 4-1 against East Carolina
at Hofheinz Pavilion.

Houston improved to 10-0 in Conference USA action with a 71-51 victory against
Rice on Thursday, marking the best-ever start in league play.

The Cougars have jumped out to the second-best start in school history at 19-4
overall.

Courtney Taylor was named the C-USA Player of the Week for the fourth time this
season after posting 21 points and 18 rebounds at Tulane.

Taylor set the all-time Houston rebounding record (1,012) at UAB on Jan. 20. Taylor
has posted 15 double-doubles this season to push her career total to a school record
55, which also ranks fourth in C-USA history.

Taylor currently places fourth nationally in double-doubles and fifth in rebounds per game (12.1).

HOUSTON, TEXAS (February 12,2011) In front of a large crowd of fans at Cougar Field, the University of Houston baseball team knocked off the a team of former Cougars 25-10 Saturdayafternoon in the Alumni Game.

The seven-inning affair was a tune-up for the Cougars who will open the 2011 season Feb. 18 against UT-Arlington at Cougar Field.

Houston scored at least one run in each inning of the contest, while holding the alumni scoreless through the firstthree innings.

The Cougars started off strong in the first inning, as Doug Drabek hit his first two batters of the afternoon. Chase Jensen would plate the first run on a double and M.P. Cokinos’ sacrifice fly scored the second run. Jensen would score on a wild pitch to give Houston a 3-0 advantage after one inning.

Houston pushed their lead to 4-0 in the second inning after John Cannon scored on Landon Appling’s sacrifice fly to centerfield after reaching base on an error by the catcher.

The best at bat for the Cougars came in the third inning. UH batted through the line-up and scored nine runs to take a 13-0 lead.

The alumni scored four runs in the fourthinning, highlighted by a three-run home run by Bryan Tully. The Cougars answered by tacking on five runs in the bottom of the inning.

The alumni had their most productive inning of the afternoon in the top of the fifth, scoring five runs. Bruce Rios then hit the alumni team’s second home run of the game in the sixth inning.