SHREVEPORT, LOUISIANA (December 27, 2019) Duke quarterback Daniel Jones (shown right and below) continued his banner year and picked up his second consecutive bowl game Most Valuable Player award in leading the Blue Devils to a 56-27 win over the Temple Owls at the 2018 Walk-On's Independence Bowl in Shreveport, Louisiana. The junior redshirt completed 30-of-41 passes for 423 yards and five touchdowns,. He carried the ball six times for one touchdown. His touchdowns established  a new Independence Bowl record, breaking the record held by four others, the last being Florida State’s James Blackman in 2017. The five touchdown passes breaks the single-game Independence Bowl record set by Florida State’s James Blackman in 2017 against Southern Mississippi. His 30 completions are third-most in Independence Bowl history, trailing Oklahoma’s Josh Heupel (39, 1999 vs. Ole Miss) and Ole Miss’ Mark Young (31, 1986 vs. Texas Tech).

In addition, the 85-yard pass to T.J. Rahming in the third quarter is the longest in Duke’s bowl history (14 games). Previous long: Jones to Rahming for 62 yards in the first quarter. Prior to the game, Anthony Boone’s 59-yard pass to Jamison Crowder in the 2013 Chick-fil-A Bowl was the longest. Jones spoke to the press after the win, explaining what woke up the Duke offense as the game progressed.


“We had a lot of good stuff going into the game. We were prepared. We hit on that first drive then, like you said, we hit a lull. I don’t think we lost confidence. We knew we could catch a few breaks, catch some momentum and keep it rolling. What happened toward the end of the first half and in the second half was we caught our groove and had enough good stuff to keep it going. The big thing there was not losing our confidence.”


He went on to talk about the offense's second half performance.

“They’re primarily a man team, playing a lot of many coverage. We liked our matchups was one thing. I’m not sure it was necessarily what they were doing. We knew we had enough stuff and it would work against a whole lot of looks. We prepared to use what we had against any of their looks. It worked out for us.”

He also discussed about catching his own deflected pass.

“I guess so (feeling like it was his day). It was an interesting play, kinda fell right to me. We caught some breaks in the second half. That was a product of our momentum and our confidence and us doing a lot of things right.” 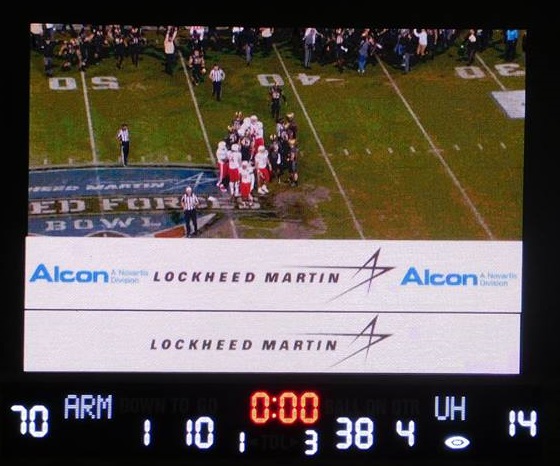 FT. WORTH, TEXAS (December 22, 2018) In a game that saw the Cougars suffer their worst defeat in a bowl game in their long-storied history, Houston dropped a 70-14 decision to the No. 22 Army Black Knights in the Lockheed Martin Armed Forces Bowl at Amon G. Carter Stadium in Ft. Worth, Texas. The loss was the third-in-a-row in post-season play for the Cougars, who dropped to 8-5 for the season.

The Black Knight took control of the game in the first quarter, when quarterback Kelvin Hopkins, Jr. scored twice, with rushes of one and 77 yards, in the final 3:58 of the quarter. The 5-10, 205-pound junior, carried the ball 11 times for 170 yards and five touchdowns in route to Army's third win in the Armed Forces Bowl. Their previous wins came in 2010, where they downed SMU 16-14, and last year; beating San Diego State, 42-35. The Black Knights became the first team to win three-total Armed Forces Bowls. Hopkins, was three-of-three for 70 yards in the air, and was honored, as a result of his performance, as the game's Most Valuable Player.

Houston could do little to contain Army, and Houston head coach Major Applewhite had little to say after the game. While speaking to the press, he stated:

“Not much to say, just disappointed in the way we coached and played today. Give credit to Army. Coach (Jeff) Monken and his players were well-prepared and outplayed us, outcoached us.”


In fact, Hopkins had more rushing yardage (170) than the entire Houston offense (87 yards on 41 carries). The Cougars managed only 14 first downs, while Army tallied 70. Hopkins 170 yards on the ground was just a small part of the Black Knight's total (570 yards).

To add insult to injury, immediately after the game, it was reported that Houston offensive coordinator and quarterback Coach Kendal Briles was leaving the program to take a similar position at Florida State. It was also reported by numerous outlets, that run-game coordinator/offensive line coach Randy Clements and two graduate assistants would be leaving Houston to join Briles at FSU.

HOUSTON, TEXAS (December 15, 2018) With the 51-10 domination of the Lake Travis Cavaliers at Houston's NRG Stadium on Saturday, the North Shore Mustangs punched their ticket to the UIL Class 6A, Division 1 football championship game next Saturday (December 22) at AT&T Stadium in Arlington. The No. 1 Mustangs will face the No. 4 Duncanville Panthers, who downed No. 2 Allen by the score of 44-35 on Saturday.

In a related game, Beaumont West Brook defeated Westlake 35-30 to advance to the Class 6A, Division 2 championship. The Bruins will play the winner of the Longview vs. Tascosa game. One interesting fact is that North Shore and West Brook are members of UIL District 21-6A, with the Mustangs talking the district title and the Bruins finishing in second place. North Shore goes into their title game with a 15-0 record, while West Brook posts a 13-2 record. The two Bruin loses came at the hands of North Shore (55-7 on October 26) and Strake Jesuit (55-40 on September 7). Duncanville brings a 15-0 record to the match up against North Shore. 2018 will make Duncanville's second appearace in the title game, having won the championship in 1998. The Mustangs have previously won two state titles in two appearances (2003, 2015) and made 24 playoff appearances.

SHENANDOAH, TEXAS (December 14, 2018) The No 2 Mary Hardin-Baylor Crusaders came back from a 10-0 deficit in the first quarter to down the No. 1 Mount Union Purple Raiders by the score of 24-16 to win the NCAA Division 3 Football Championship at Woodforest Bank Stadium in Shenandoah, Texas. The win was the second national title for the Cru in the past three years; having won the Stagg Bowl in 2016.

After a missed field goal by the Crusaders in the first quarter, Mount Union drove the ball 55 yards, on their second possession, to enable kicker Cory Barnett to boot a 55-yarder for the first score of the game. The Purple Raiders used 11 plays and 3:58 to score. Beginning on their own 23-yard line, after the ensuring kickoff, UMHB quarterback Jase Hammack fumbled the ball on a second and 10 play, with safety Austin White recovering on the 23-yard line. Five plays later, D'Angelo Fulford carried the ball the final yard for the touchdown. Barnett tacked on the extra point; giving Mount Union a 10-3 lead with 3:29 remaining in the first quarter.


A bit over two minutes later, the Cru drove 62 yards in four plays to cut Mount Union's lead tofourth play of the  three. On the series, Hammack connected with T.J. Josey with a 36 yard pass for the score. Anthony Avila recovered from missing the earlier field, booting the extra point to cut the Union lead to 10-7. Josey (shown left) finished the game with five catches for 78 yards and one TD. As a result, he was selected as the Outstanding Player of the Game, by a vote of the sports writers.

Early in the second quarter, the Purple Raiders responded with another Barnett field goal; this time a 22-yarder, to push their lead to 13-7. After a good deal of back-and-forth, the Cru saw momentum swing their way as they used seven plays to cover 60 yards in 2:34 to take the lead in the game. Thirty-eight second reminded on the clock when Markeith Miller rushed the final two yards for the score. Avila tacked on the extra point to give MHB a 14-13 lead at halftime.