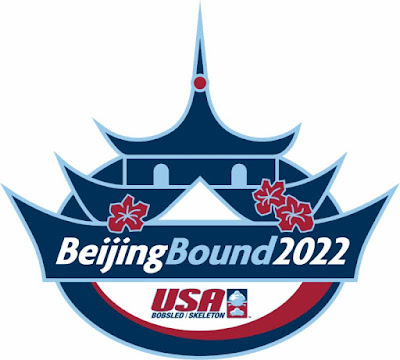 LAKE PLACID, NEW YORK (October 28, 2019)  The 2002 Olympic track in Park City, Utah has been temporarily closed, leading to the cancellation of the Park City USA Bobsled/Skeleton Team Trials races. The series has been rescheduled to take place at Mount Van Hoevenberg in Lake Placid, N.Y.
The Utah Olympic Park issued the following statement regarding the closure:

"The Utah Olympic Park is examining a mechanical malfunction with the refrigeration system at the sliding track. Until the engineering team can fully assess and diagnose the issue and implement a solution, the track will remain closed. The timeline on the repair remains unclear until the faulty pump can be removed from the system, and inspected, however expert resources are being deployed to make sure this process is both fast and meets best practice on engineering standards."

The USA Skeleton Team Trials races three and four are now scheduled to take place on Saturday, Nov. 2 and Sunday, Nov. 3 in Lake Placid.
The USA Bobsled Team Trials will take place in conjunction with the Lake Placid North American Cup. Two-man bobsled will race Nov. 18 and 19. Women's bobsled is scheduled for Nov. 19- 20, while four-man bobsled will compete from Nov. 20-21.

HOUSTON, TEXAS (October 26, 2019) The Southeastern Louisiana Lions scored two touchdowns in the first quarter and the HBU Huskies were unable to catch up in the Lions 52-13 win at Husky Stadium on Saturday evening. The Huskies scored two field goals in the first quarter and added a touchdown and extra point in the second quarter to highlight the game scoring for HBU.

The field goals by Gino Garcia, 43 yards and 31 yards, and the six-yard TD run by Jerreth Sterns, were the only scoring drives the Huskies could muster in route to their fourth straight loss of the season. The Huskies stand at a 4-5 record with three games to go in their 2019 campaign. The two programs have met five times prior to 2019, with the Lions winning four of the five contests. The lone HBU win came on October 26, 2014, were the Huskies downed the Lions by the score of 31-21 at Husky Stadium. 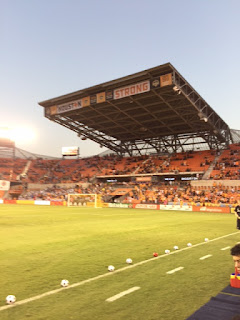 HOUSTON, TEXAS (October 27, 2019) The Houston Dynamo has named Tab Ramos as their fourth official head coach in program history. The 53-year-old former professional player will bring eleven years of coaching  experience to the posistion; having spend the past eight years as the head coach of the United States men's national under-20 soccer team.

Over this thirteen-year professional career, Ramos played as a midfielder in Spain, Mexico, and the United States. He was the first player to sign with Major League Soccer, andspent the last seven years of his career with the New York/New Jersey MetroStars, now known as the New York Red Bulls. He appeared in three FIFA World Cups for the United States and was elected to the National Soccer Hall of Fame in 2005.

As a coach, Ramos led the under-20 age group team to the final of the 2013 CONCACAF U-20 Championship where they lost to Mexico. The team qualified for the 2013 FIFA U-20 World Cup, however they failed to make it out of the group stage, finishing bottom with 1 point.

In November 2013, he signed a contract to remain in the position. He won the 2017 CONCACAF U-20 Championship with the United States, with assistant coaches Omid Namazi and Brad Friedel.
Posted by TexSport Publications at 10/27/2019 03:20:00 PM No comments: 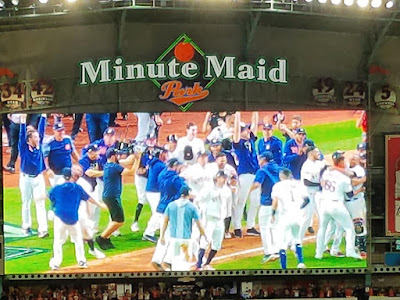 Story and photo by Lou Roesch
Copyright 2019 All Rights Reserved

HOUSTON, TEXAS (October 20, 2019)  Long before the first pitch was thrown in spring training, the Houston Astros had a mantra “Take It Back.” Those three words came after the presumed 2019 regular season MVP Alex Bregman sat down with Houston president Reid Ryan and the marketing staff. On Saturday night, October 19, 2019, the Astros seized back the American League pennant after being knocked out last season by the Boston Red Sox. The 6-4 defeat of the New York Yankees leaves Houston only four games from seizing back the title of world champions. Astros second baseman Jose Altuve, the ALCS MVP, saw to that with a walk-off two run homerun at Minute Maid Park.

Houston jumped on Yankees starter Chad Green in the opening frame. With two on, first baseman Yuli Gurriel launched a sinking liner into the Crawford Boxes in left field and Minute Maid went into a frenzy. The atmosphere began to intensify the closer New York drew. In the second, the Bronx Bombers answered back plating Did Gregorious on a cutting the deficit to two. Two innings later, the deficit was one as Gio Urshela, the Cartagena, Columbia native, took Houston reliever Jose Urquidy deep to centerfield.

The game would stay that way utill Houston got the insurance run back on a fielder’s choice off the bat of Bregman. The chess match between Astros manager AJ Hinch and Yankees skipper Aaron Boone continued unabated as each side squandered scoring opportunities till the ninth. Houston brought in their closer Roberto Osuna to seal the victory instead he allowed New York back in. Leadoff hitter DJ LeMahieu dropped one over the outstretched glove of George Springer into the seats in right setting the stage for Altuve.

Yankees closer Aroldis Chapman appeared to have the Astros number throwing 12 straight strikes in retiring the first two Astros hitters before the wheels fell off. Springer drew a walk on five pitches as Altuve stepped to the plate.
'
“It’s going out to left,” ace Gerrit Cole, as later recounted to Fox Sports, predicted on the Astros’ bench when Altuve came to the plate in the ninth. “And it’s going deep.”

With what would be the last pitch of the ALCS, Altuve crushed the 324th pitch of the game deep into the night (407ft) sending Houston to its second World Series in three years sending the more then 43,000 in attendance into not just a frenzy but a rabid frenzy.

“This is one of the best places to play,” manager A.J. Hinch said. “To reward [the fans] with that experience of the walk-off homer, give them a chance to just go crazy at close to midnight and know that we’ve got more baseball to be played. We still have home-field for the World Series. It’s why we worked our tail off to get as many wins as we could. It is for them. We want to hang another flag for them, and we’re four wins away.”

In its quest to “take it back,” Houston posted a record 107 win season. They went a perfect 50-0 at home when leading by three in a game. The Houston ‘Boys of Summer” were a league leading 60-21. Only the Washington Nationals stand in the way of completing the quest.
Posted by TexSport Publications at 10/20/2019 06:02:00 PM No comments:

SOUTH HOUSTON, TEXAS (October 12, 2019) The Deer Park 10U Cougars won their first game and tied their second game in their third weekend of fall co-op play at the South Houston girl's softball fields. In their first game, they downed the Pasadena Lady Texans by the score of 4-3. In the second game of the Saturday afternoon double-header, the "Ladies in Red" tied the Deepwater Sharks 2-2.

Against Pasadena, the Cougars were led by catcher Kirstin Kelly, scoring two runs and going 1-for-1 at the plate with a double in her second at-bat. Starting pitcher Maddie Farmer connected for a single at the plate and struck out three from the mound. First baseman Elizabeth Posada got on base with two singles and scored the second run for Deer Park. Second baseman Jordyn Halik also hit a single, along with shortstop Sesslee Shreffler, who also scored.

In the second game, head coach Larry King switched up the players' position and use a different lineup against the Sharks. The defensive skills of Mikaela Provost, Paige Taylor, Brooklyn Smith, Aliyah Zavaleta, and Ava Sarratt by allowing only two batters to get to on base via two singles. Posada pitched against the Deepwater, striking out three and scored the game tying run with a double with two extra base for the score. In addition, Taylor connected for a single with Farmer getting on base with a single and scoring the first run of the game for the Cougars.

With the win and the tie, the Cougars now post a 4-1-1 record in co-op play, The final games of the 2019 Fall Co-op Season will be Saturday, October 19 at the South Houston softball fields.

The Cougars are coached by Larry King, Hillary Williams, Dale Yurt, and Cory Provost.
Posted by TexSport Publications at 10/12/2019 11:57:00 PM No comments: 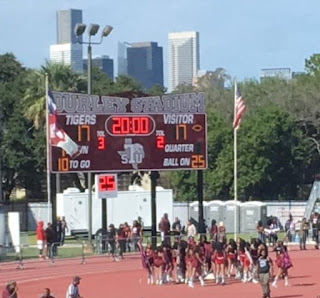 HOUSTON, TEXAS (October 12, 2019) Playing in the closest game they have all season, the Texas Southern Tigers dropped a 23-20 decision to the Missouri S&T Miners in their 2019 Homecoming Game at Alexander Durley Stadium on Saturday. The Tigers trailed by the score of 10-7 after 15 minutes of play, and battled to a 17-17 score at halftime (see photo right). The second half saw both teams defenses shine with the Miners managing two fields goals in the third quarter to give them 23-17 lead at the 3:51 mark. The Tigers fought tooth-and-nail in the fourth quarter, but could only manage a 24-yard field goal by Richard Garcia III with 9:36 remaining in the game.

Garcia, who played his high school ball at Mesquite Horn High School, also tallied a 45-yarder in the second quarter, along with two extra points. Running back Dominic Franklin (Chavez HS, Houston) capped a five-play, 60-yard drive with a six-yard run for the Tigers' first score. The fleet-footed sophomore added TSU's second TD of the game with 6:42 remaining in the first half. He carried the ball the final one-yard for the score, after the Tigers moved the ball 74 yards in eight plays. Franklin carried the ball 22 times for 144 yards, with a game-longest rush of 22 yards. TSU accounted for 446 yards of total offense, while the Miners tallied 397 yards. On defense, Mene Khepera (Bishop Dunne HS, Dallas) led the game with 11 tackles, with six solos, and one tackle for a loss.

With the loss, the Tigers fall to 0-6 for the season, with an 0-2 record in the Southwestern Athletic Conference (SWAC). They will next hit the road to face Southern University in the State Fair Showdown at the historic Cotton Bowl Stadium in Dallas. The game is scheduled for a 2 p.m. kickoff on Saturday, October 19.

Readers can access the box score and statistics from the game by clicking here.

HOUSTON, TEXAS  (October 11, 2019) The No. 5 North Shore Mustangs continued its streamrolling of opponents in their 49-7 win over the Deer Park Deer on Friday evening at Abshire Stadium in Deer Park. The Mustangs raised their season record to 5-1 while the Deer dropped to 3-3 in Week 7 action.

The Mustags have outscored their opponents 140-66  through six games, and have already assured themselves of a playoff berth. The Deer, who have four games to play in District 21-6A action, must face C.E. King (Oct 18), Sterling (Oct 25), No. 2 West Brook (Nov 1), and Beaumont United (Nov 7). On the other hand, North Shore rounds out their final four regular season games facing No. 8 Beaumont Westbrook (Oct 24) and Channelview (Nov 8) on the road, and hosting Sterling (Oct 18) and Beaumont United (Nov 1).