The event, which was the final international event leading up to the 2006 Olympic Winter Games in Torino, Italy, was Taylor’s first senior-level international event. She was in second place after the short program and placed second in the free skate with a total score of 164.05.

Japan’s Yukari Nakano, the silver medalist, received a mark of 161.49, while Taylor’s U.S. teammate, Bebe Liang, captured the bronze medal with a score of 159.91.

“I just wanted to go out there and do two good skates, and I did,” said Taylor.

“I was really upset about missing my loop because it is one of my best jumps,” Taylor said. “I felt good going into it. I think I just pre-rotated myself, but I know I wasn’t holding back. I think next time I can get it.”

Twenty-three ladies took part in the free skate, including Christine Zukowski of the United States, who struggled to a score of 131.42 and a 10th-place finish.

Hays will be making his third trip to the Games, after winning a silver medal as part of the four man bobsled team in 2002. He also competed in the two man event, placing fourth with teammate Garrett Hines.

He finished the 2004-2005 season ranked ninth in the two man event, sixth in the four man event and seventh in the combined World Cup standings.

He graduated from the University of Tulsa with a degree in physical education in 1994, after a stellar career in football. He was also the 1993 National Kickboxing champion.

(Lake Placid, NY-January 15, 2006) The United States Bobsled and Skeleton Federation have announced that Kevin Ellis of Dallas, Texas has been nominated in the sport of skeleton for the 2006 Winter Olympic Games in Turin, Italy.

The United States Olympic Committee will review the nominations and make the final decision on his participation in the Games.

Zach Lund, of Salt Lake City, Utah and Eric Bernotas of Avondale, Pennsylvania were also nominated to the team.

As a result of the USA being ranked second overall in World Cup points, they were allowed to nominate three male athletes.

All three men will be making their Olympic debut in Turin.

His best finish in a world class event was a second place finish in the America’s Cup race Calgary, Canada in November, 2004.

Ellis uses his experience in track and field to give him an advantage at the start.

He holds many start records in both the United Sates and around the world.

She scored 103.85 points in the long program, giving her automatic bid to the 2007 Nationals and kept her on pace for a 2010 Olympic bid.

Taylor skated well, but fell on her triple salchow and left out the second half of her closing triple lutz-double toe loop combination.

“I came here wanting to have two good skates, and to be standing on the podium is just icing on the cake,” she said.

The evening had to be bittersweet for Hughes, who was bumped from the Olympic squad to make room for an injured Michelle Kwan.

Kwan petitioned the U.S. Figure Skating Association for an injury waiver to compete in Turin.

The waiver was granted, making Cohen, Meisssner, and Kwan the three women who will represent the United States at the Winter Olympic Games in February.

However the fourth place finish for Taylor, who finished in ninth place at last year’s Nationals, improved her chances of representing the USA at the Olympics in four years in Vancouver.
Posted by TexSport Publications at 1/15/2006 11:07:00 AM 1 comment: Links to this post

EAST ROLLS PAST WEST IN US ARMY ALL AMERICAN BOWL 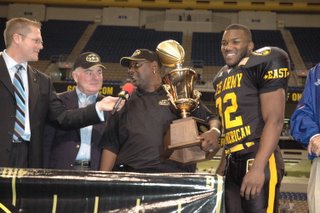 Scoring three touchdowns and rushing for 67 yards, Chris Wells lead the East squad to a 27-16 victory over the West squad in the 2006 U.S. Army All American Bowl at San Antonio’s Alamodome.

Wells, a running back from Garland High School in Akron, Ohio, who was named the game’s Most Valuable Player, showed tremendous form and poise that will continue in the fall at Ohio State University.

“We had a good week of practice,” Wells said. “We worked on goal-line a lot and the first time we got the ball today, I think we were in the red-zone pretty quick. We knew what we had to do and we went out and did it.”The East defense set the pace for the game, causing a fumble on the West’s first drive, which lead to the first score of the game for the East.

The East put the game away in the fourth quarter when linebacker Brandon Graham blocked a field goal that was recovered by cornerback Raeshon McNeil and ran back for a touchdown.

“I pointed to my parents in the stands before that field goal,” Brandon Graham said. “I knew I was going to get that block I told coach also that I’m about to go get it. I blew right past the offensive line and got it. I can’t explain that feeling. This is something that I can take with me for the rest of my life.”

Wells, who showed the fans in attendance what they can expect to see from him at Ohio State next fall.

“It’s just a great honor for me to get the MVP,” Wells said. “Just to go out there and accept the trophy was a blast. I mean, I’m going to school at Ohio State next year with Teddy Ginn. This is just incredible.”

Previous recipients of the award include California’s DeShaun Jackson, Ohio State’s Tedy Ginn, Jr., Florida’s Chris Leak and Chris Young of the University of Texas.
Posted by TexSport Publications at 1/08/2006 12:56:00 AM No comments: Links to this post

Ben Johnson States "I am not a cheat"

It was reported today in the Victoria, Australia newspaper HERALD SUN that Canadian sprinter Ben Johnson stated he was framed for using performance-enhancing drugs at the 1988 Summer Olympic Games in Seoul, South Korea.

Johnson ran 9.87 seconds to win the 100 meters, but he was disqualified and stripped of his gold medal after he tested positive for performance-enhancing drugs.

Johnson was quoted as saying,

“People can put things in your food and drinks to sabotage you, like they did to me in Seoul in 1988. I'm not a cheat -- I do what I am supposed to do to win.”

One has to wonder why he is making that statement now, when its validity didn’t hold up eighteen years ago in Seoul.

"People are evil. They will do anything to get rid of someone from the sport. I would say 40 per cent of people in sports are using performance-enhancing drugs. You would be surprised to see the great players of the past who retired doing stuff."

An unconfirmed report has just be announced on Sport Talk Radio 610AM in Houston that Houston Texans Head Coach Dom Capers will be fired tomorrow (Monday, January 2, 2006).

What a surprise. There should be more that just he handed a pink slip. What about the GM and many of the assistants? And can we forget some of the players? Perhaps some trades are on the horizon?
Posted by TexSport Publications at 1/01/2006 08:55:00 PM 2 comments: Links to this post

THE QUESTION!!! ARE THE TEXANS AND REGGIE BUSH A MATCH?

The Houston Texans, by way of a New Year’s Day loss to the San Francisco 49ers, can earn the overall number one pick in the upcoming NFL draft. Many “experts” expect the Texans to select Heisman Trophy winner Reggie Bush.

Others wonder if this is best route for the victory challenged Texans. Another option might be to trade away their number one pick and get two or three draft choices.

Only time will tell what will happen, and by late evening on New Year’s Day, all with know if the Texans get the top pick.

One thing is guaranteed. There will be major changes in Houston for next season, and those changes may include coaches, players, and front office staff.

If Reggie Bush does become a Texans, then so be it. In any case, they need to find the right combination of talent, coaching and management to make this program work.

After all, professional sports is about winning, and the Texans found little success at that in their brief history.
Posted by TexSport Publications at 1/01/2006 11:45:00 AM 2 comments: Links to this post