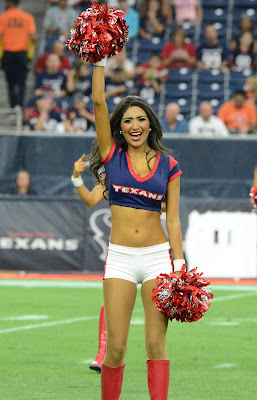 HOUSTON, TEXAS (August 22, 2015) As any die hard fan knows, cheerleaders go hand-in-hand with football. It does not matter the level of play. In the NFL, and more specifically, the Houston Texans, the cheerleaders contribute to the excitement of the game. The Houston Texans Cheerleaders are a group of 34 young ladies who put their heart, soul, and sweat into their preparation for everything they do.

Enclosed in this article is a photo montage by Darla Tamulitis of La Vita Loca Photography of the actions and appearances of the cheerleaders during the Houston Texans game against the Denver broncos on Saturday, August 22, 2015. All photos are the property of Darla Tamulitis-La Vita Loca Photography, Copyright 2015, All Rights Reserved. They are used here with permission. 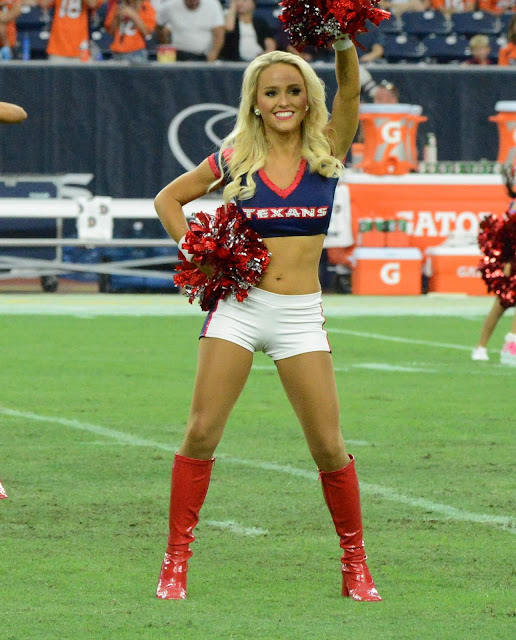 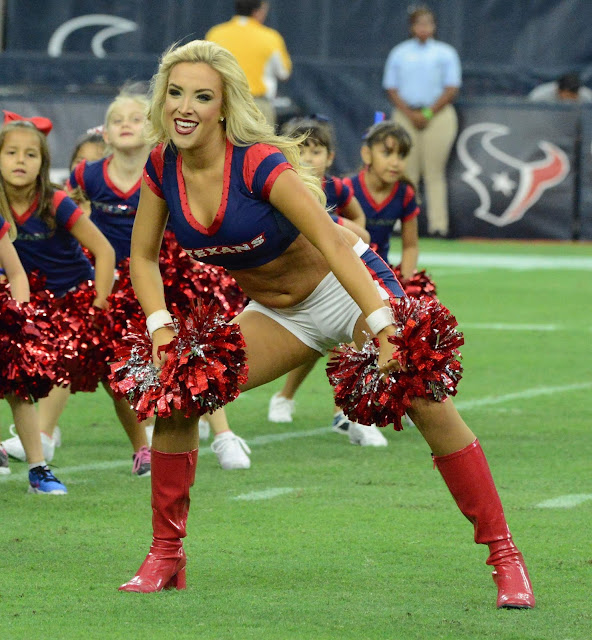 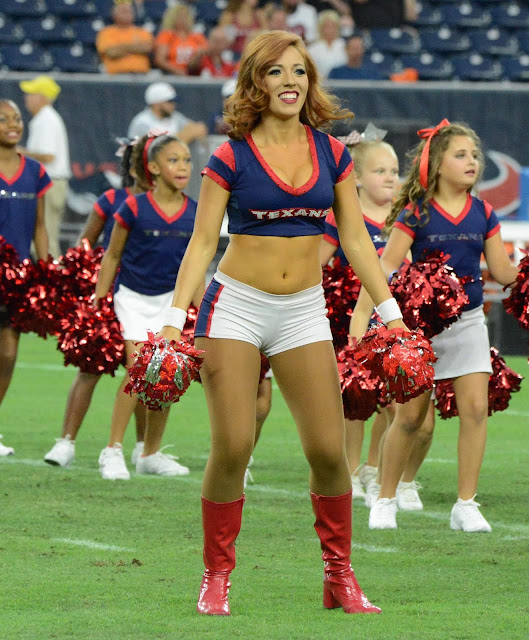 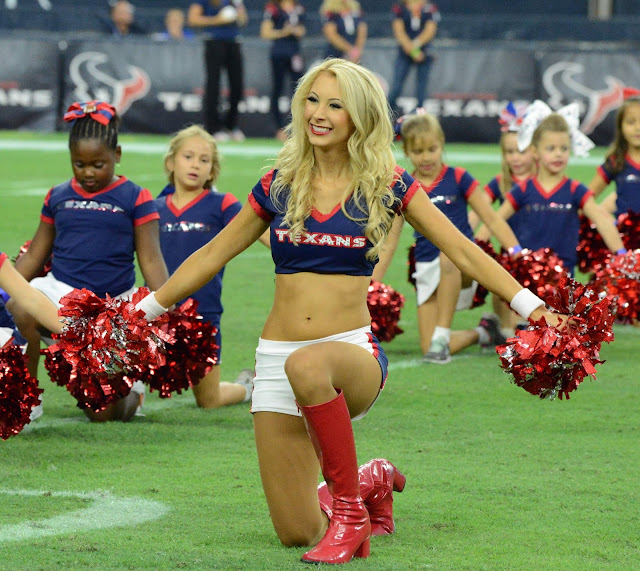 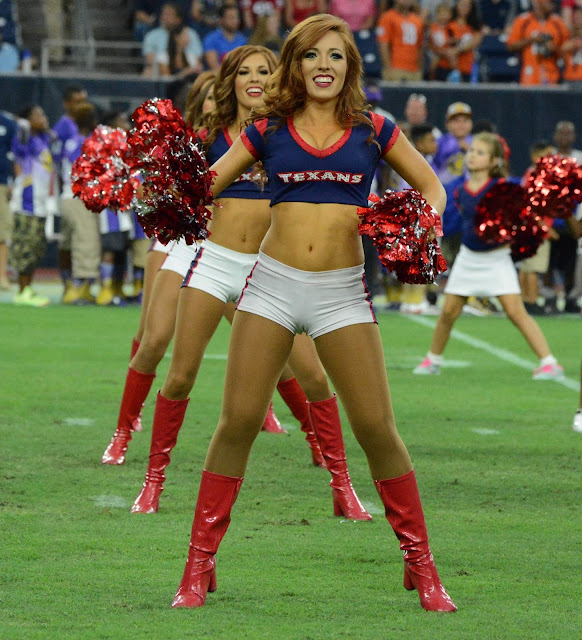 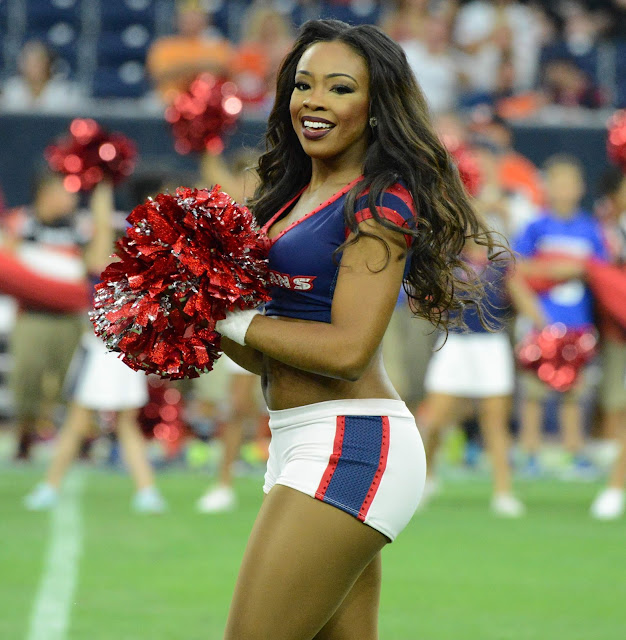 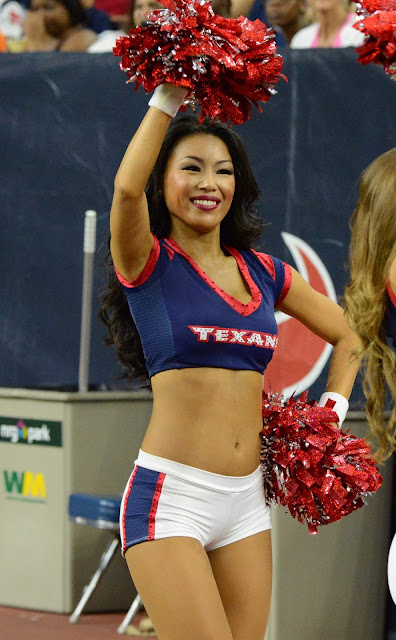 The only way to close out this article and accompanying photos is to ask "Did you enjoy it?" 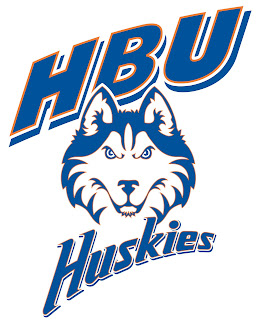 HOUSTON, TEXAS (August 21, 2015)  HBU women’s soccer began the 2015 season the same way it ended the 2014 Southland Conference Tournament: with a shutout win. The Huskies christened the new season with a 1-0 victory over Texas Southern Friday evening at Awty International School.

“I was pleased with our tenacity,” said HBU head coach Misty Jones. “The ladies battled hard and Gabby had a great goal.”

Gabby Rodriguez scored her first collegiate goal, while Allison Abendschein registered an assist and had a match-high six shots. Katie Turner earned her first-collegiate shutout as she made two saves.

Four different Lady Tigers had a shot, while Marlyn Campa and Paige Hayward each registered a shot on goal. Liliana Hernandez took the loss despite making seven saves.

The match was delayed an hour and 40 minutes due to rain and lightning, but once the match started, HBU took offensive control, outshooting the Lady Tigers, 8-1, and 5-1 in shots on goal. But despite the offensive pressure, the match was scoreless entering halftime.

HBU got on the board in the 62nd minute, as Abendschein fed Rodriguez, who streaked up the left side and beat Hernandez far side for a 1-0 Huskies lead.

About 15 minutes later, Turner made a spectacular save, as, despite facing two Lady Tigers alone in front, she challenged the ball dribbler and TSU was not able to get a shot off.

HBU hosts Texas State Sunday, Aug. 23 at 7 pm, tentatively scheduled to be played at Sorrels Field. Check back to HBUHuskies.com to site location updates.
Posted by TexSport Publications at 8/21/2015 11:58:00 PM No comments:

PASADENA, TEXAS (August 14, 2015)The 66th annual Pasadena Livestock Show and Rodeo is scheduled for September 11-19, 2015 at the Pasadena Convention Center and Rodeo Grounds. Rodeo and country music fans from Pasadena and the Houston, Texas area will converge into the Houston suburb for nine days and nights of action.

Traditional rodeo events, along with nightly concerts, beauty pageants, crawfish festival, bowling and golf tournaments, kickoff dance, parade and junior rodeo events, will give those in attendance numerous activities to attend and participate.

Country music favorite Kevin Fowler will perform on Friday, September 11, 2015 with ticket prices ranging from $15 to $25. Saturday, September 12, 2015 will see Cody Johnson take to the stage at the rodeo arena. Monday and Tuesday evenings attendees will be entertained by local high school bands.

In addition, every night with the exclusion of the Sunday dates, people may sign their children up for one of the favorite events of the rodeo; mutton busting. The event will be held nightly before each performance in the rodeo arena. Each child must weigh less than 60 pounds with awards and prizes for the winners.
Posted by TexSport Publications at 8/15/2015 10:36:00 PM No comments:

THIHU, CHINA (August 15, 2015) The Houston Cougars dropped the second game in their 10-day, four-game trip to China by the score of 77-66 against the Chinese Basketball Association’s Qingdao Doublestars on Saturday, August 15, 2015. The game was played at the Taihu County Sports Center in Taihu, China and was ended with 85 second remaining due to a series of minor altercations between players from both teams.

The leading scorer for the Cougars was redshirt junior Bertrand Nkali with 11 points, hitting four field goals and going 3-of-4 from the free throw line. The 6-8 forward sat out the 2014-2015 season after surgery for a sports hernia. He played the 2012-2013 season for Harcum Junior College in Bryn Mawr, Pennsylvania, following up with the
2013-2014 season at Lee College in Baytown, Texas.

Entering the fourth quarter with the score tied at 54, the Doublestars went on a 21-4 run to take the lead that remained until the game was called. Fouls had a definite outcome on the game with the Cougars whistled 31 times, while their Chinese opponents were called a mire 12 times. The Cougars were 7-of-12 from the free throw line while Qingdao connected 33 times on 47 attempts.

Also aiding in the scoring was junior guard Damyean Dotson and senior forward LeRon Barnes, both with nine points. Senior forward Devonte Pollard chipped in eight points in the effort.

HEFEI, CHINA (August 14, 2-015) The Houston Cougars jumped out to a 51-49 lead at halftime and came back hard in the second half to down the Chinese Junior National Team by the score of 93-83 at Golden Seed Arena in Hefei, China on Friday, August 14, 2015. The game was the first contest in the Cougars’ 10-day, four-game trip to China.

Houston was led by junior guard Damyean Dotson, who scored 21 points and pulled down eight rebounds; seven of which were on the defensive end of the court.  Nine of Dotson’s 21 points were from beyond the three-point line.

Dotson, a 2012 graduate of Houston’s Jack Yates High School, played his first two college seasons at Oregon prior to transferring to Houston. He sat out the 2014-2015 season as a red-shirt sophomore while attending Houston Community College.

The Chinese Junior National Team held a 30-28 lead at the end of the first quarter and rallied to tie the score in the fourth quarter at 67. At that point, Gray, Jr. and Robinson, Jr. combined to score 12 points to give Houston the lead, of which they would not relinquish the rest of the contest.

The Cougars will play three more games on their China trip. They will again face the Chinese Junior National Team on Saturday, August 15 in Wangiiang, Sunday, August 16 in Taihu, and Monday, August 17 in Tongling. They will return to Houston on Thursday, August 20. At games are scheduled for 7:30 p.m. China Standard Time, which is thirteen hours ahead of Houston time.
Posted by TexSport Publications at 8/14/2015 02:47:00 PM No comments:

CARSON, CALIFORNIA (August 6, 2015) In a game that looked like the Pittsburgh Steelers taking on a junior college football team, the LA Galaxy scored two goals in the first half and added three more in the second to down Central FC of Trinidad and Tobago by the score of 5-1 in front of 13,625 screaming fans at the StubHub Center in Carson, California on Thursday, August 6, 2015. The game was a Group D match of the 2015-16 Scotiabank CONCACAF Champions League.


The Galaxy wasted no time in getting on the scoreboard, when captain Alan Gordon took a pass at the top right of the box and headed it past Central goalkeeper Jan-Michael Williams in the fourth minute. The Sharks came back two minutes later and scored an equalizer when Galaxy goalkeeper Brain Rowe was called for a hard takedown of Kelon Goodridge.  Central’s Ataulla Guerra took the kick and sailed it past Rowe.

The action stayed fast and furious for the next 24 minutes, until Gyasi Zardes gets the ball on a great offensive run and feeds it to Gordon. The Captain aptly dribbled the ball past the Central defenders and passes it to Raul Mendiola, who skillfully puts the ball into the goal to again put Los Angeles up by one.

Galaxy fans were on their feet with their attention directed at the field when Williams takes out Mendiola in front of the net. No foul was given by the referees and after a few minutes of lying on the grass, Mendiola left the field with medical staff and was quickly replaced on the field by Sebastian Lletget. At the halfway mark, the Galaxy took a 2-1 lead into the locker room.

Ten minutes into the second half, Central gets called for a penalty, which allows the Galaxy a chance to go up by two. Zardes calmly and coolly strode to the ball for the penalty kick, and in true galaxy fashion, put the ball into the goal past Williams to give Los Angeles a 3-1 lead.

In the 76th minute, Galaxy newcomer Giovani DosSantos scored his first goal for Los Galácticos. Lletget took the ball and with a very nice touch, flicked it to Rafael Garcia, who in turn, squared it to Dos Santos for the simple tap-in to give the Galaxy a 4-1 lead.

Los Angeles added an insurance goal in the 85th minute when Ignacio Maganto found himself in the right place at the right time and knocked the ball into the net for the Galaxy’s fifth score of the game.

The Galaxy will next face Communicciones FC from Guatemala on August 18 at the the StubHub Center.

LINCOLN, NEBRASKA (August 3, 2015) Three members of the South Belt Area “All Stars” Swimming Team competed in the State Games of America national championships on August 1-2, 2015 in Lincoln, Nebraska and bought back a pot full of gold medals to the Houston area. Brothers Landon and Carson Howard, along with James Sephton competed in the two-day event in a total of 16 individual and two relay events and won a total of 16 medals.

Landon, Carson, and James again team up to take the gold medal in the 200-meter medley relay, with fellow swimmer Bam Meeks.
Posted by TexSport Publications at 8/03/2015 06:22:00 PM No comments: