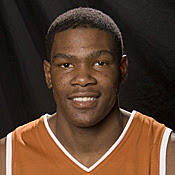 University of Texas basketball standout Kevin Durant was named the Associated Press’ college basketball player of the year. He is the first freshman to receive the award.

Durant receives all but two of the 72 votes cast from the national media panel that selected recipient of the award.

He was also selected to the AP’s All American team earlier in the week, averaging 25.6 points and 11.3 rebounds per game.

University of Texas coach Rick Barnes was quoted, "There's no question Kevin deserves every individual accolade that he will receive. But the one thing I respect most about Kevin is that he is the ultimate team player. He really doesn't care about the individual numbers and awards. All he cares about is the success of his team. When you're around a guy like that, it makes coaching him a joy."
The only question in my mind is when will Durant announce he is leaving the college ranks and enter the NBA draft?
This young man has nothing to prove in college anymore. However, I wonder if he is mentally and physically mature enough to handle the NBA?
His skills seem to be of the caliber to handle the talent in the NBA. But will his mental skills be able to handle the stress and strain of the NBA season? There are many distractions that go along with being a professional athlete. I hope he has someone to help him down the road and make the transition from college to the NBA ranks a smooth journey.
There is no doubt in my mind that he will be going to the NBA and forgo his college career at Texas. I just hope he is smart enough to get his education along the way.
When this writer was a student at the University of Texas, I had Earl Campbell in a class. That was his senior year and he missed the class quite frequently. After all, that was his Heisman Trophy year and he was being courted by the NFL. As any sports fan knows, he was drafted by the Houston Oilers and went on to a stellar professions career.
What many don’t know is that Campbell went back to UT and finished his degree afetr he went pro.
I hope Durant has the same good sense. After all, how will he manage his millions and trust those who will be by his side he doesn’t have that education?

Durant's skills will need to develop once he reaches the NBA. Even Kobe and Lamar Odem had some adjusting to do when they got to the show.

One thing is sure. His contact and endorsement package will break all the records.

He is going to be great to watch.

Yes, he will be great to watch in the NBA. I see the Celtics getting him. Afetr all, they have alerady paid the fine.