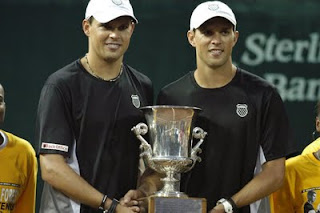 HOUSTON, TEXAS (April 9, 2011) The doubles team of Bob and Mike Bryan added another title to their impressive resume by winning the 2011 US Men’s Clay Court Championships at River Oaks Country Club in Houston.

The victory was their fourth in the tournament in Houston and their 69th in the ATP.

The number one doubles team in the world has a following in Houston, winning their fourth title in the Bayou City before of a sold-out crowd.

The brothers, who have won 16 straight games in Houston, got to the championship match by downing in the semifinals of the couple formed by Guillermo Garcia-Lopez and Pablo Cuevas in the semifinals, 7-5, 6-1.
Posted by TexSport Publications at 4/09/2011 08:13:00 PM