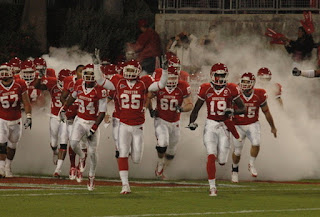 
HOUSTON, TEXAS (October 21, 2011) With about 1.5 hours until kickoff of the Houston Cougars and the Marshall Thundering Herd, I can be found sitting in the press box at Robertson Stadium enjoying a plate of nachos and drink a Diet Coke.

Having all my pre-game coverage completed, it also gives me time to put my fingers on the keys of this old laptop and to expound on some observations I made while walking to the stadium from the satellite lot where I parked my old Chevy truck.

This weekend is homecoming. The air is full of the atmosphere of any typical football, except it multiplied to the Nth degree.

There is more bar-be-cue, beer and red and white that this place has seen in a long time.

Yes, it is like that at any Cougars game, but this is homecoming weekend.

Alumni come from all over to visit the campus and see the spectacle that this game has become.

The Cougars are 6-0. The last time they had won their first six games without a loss was 1990.

Quarterback Case Keenum is on track to break two more records this season.

Unless the ground opens up and swallows the entire Cougar offensive squad, that record will be broken today.

That record could also go down today. In fact, I would be willing to bet the rent money that it does.

But setting all that aside, The Rob is the place to be in Houston this weekend.

Talk is all round about the idea of Houston leaving Conference USA and joining the Big East Conference.

Other talk is going around about the Mountain West Conference and Conference USA combining in football for a “super” 32-team conference.

But as in everything, talk is cheap and rumors abound at every turn

If any of those proposals, rumors, and scuttlebutt becomes reality, there will be time to discuss the pros and cons of them later.

In closing, today is about the next four hours and what happens on the green grass inside Robertson Stadium

Hosuton Cougars Football. There is nothing like it in Houston on October 21, 2011.