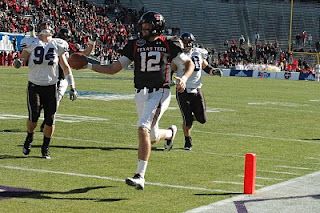 (Taylor Potts rushed for one touchdown and threw for four more in Texas Tech's win over Northwestern at the 2011 Ticket City Bowl. Photo by Darla Tamulitis-La Vita Loca Photography, Copyright 2011, All Rights Reserved)

This time last year, former interim Texas Tech head coach Ruffin McNeill had just come off leading the Red Raiders to a 41-31 win over Michigan State in the Alamo Bowl in San Antonio.

The Red Raiders have had three different head coaches at the helm of their storied football program during their past three bowl games.

This year, it was Tuberville’s chance to place his mark in the annals of Red Raider football history.

The game was an offensive show, with both teams combining for a total of 927 yards.

Red Raider quarterback Taylor Potts, who was selected as the game’s MVP, completed 43 of 56 passes for 369 yards and four touchdowns. He also rushed for 19 yards on two carried with one touchdown.

Eric Stephens added one rushing touchdown off of 126 yards, with Lyle Leong and Austin Zouzalik combining for three receiving touchdowns.

On the Northwestern side, Kain Colter rushed for 105 yards and two touchdowns while Evan Watkins completed 10 of 21 passes for 76 yards and one touchdown.

Tech jumped out to an early 10-6 lead on a Matt Williams field goal and the Zolzalik touchdown in the first quarter.

The Wildcats came clawing back at the 6:47 mark of the second quarter on one of Colter’s rushing touchdowns. The rushing conversion failed making the score 10-6 in favor of Tech.

Potts then scored his rushing touchdown to give the Red Raiders a nine point lead.

Leong then scored on a six-yard pass from Potts with 11 seconds left in the half to make the score 24-6.

Northwestern head coach Pat Fitzgerald made some adjustments at halftime, and the Wildcats came roaring back in the second half scoring three times in the 3rd quarter.

Stefan kicked an 18-yard field goal at the 11:25 mark, followed by a Colter one-yard touchdown run five minutes later, and a Watkins four-yard run to make the score 38-24.

Northwestern continued to cut the Red Raider lead, when Demetrius Fields caught an 18-yard pass from Watkins to cut Tech’s margin to seven.

Tech then increased their lead back to 14 on another reception from Potts to Leong; making the score 45-31.

Northwestern scored the final point of the game when Jordan Mabin snagged a Potts pass and returned it 39 yards for a touchdown.

With the win, the Red Raiders finish the season with an 8-5 record. The Red Raiders have won at least eight games in each of the last nine years.
Posted by TexSport Publications at 1/01/2011 04:08:00 PM