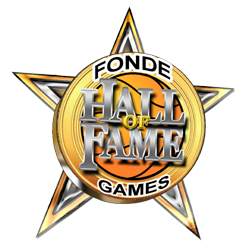 HOUSTON, TEXAS (January 5, 2014) Those fans in attendance at Fonde Recreation Center on Saturday, January 4, 2014 in Houston were witness to some of the best high school basketball action in the nation in the Fonde Hall of Fame Games.

Day two of the Fonde Hall of Fame Games saw eight teams battling it out on the hardwood inside the Fonde Recreation Center with each of the games named after a basketball legend that was in attendance to present awards to those players and teams in their signature named game.


Lattin, who was Houston's first high school basketball All-American when he played at Worthing High School, was the starting center for the Texas Western Miners when they won the 1966 NCAA basketball championship.

He later played professionally for the San Francisco Warriors and the Phoenix Suns.


In a match that had Bellaire leading 28-22 at the half, those in attendance saw Trent rally back, scoring 33 points in the second half, to win the game 55-53.


Simonas Januskis scored16 points for Trent, followed by DaRon Curry with 14 and Lbrahim Dumbia with 10.


Hayes played his college ball for the Houston Cougars and currently is a radio analyst for the Cougars.


He is a member of the Naismith Basketball Hall of Fame and was the NBA’s 50th Anniversary All-Time Team.


Jamel Williams was the high scorer for Episcopal with 17 points, with Qyemah Gipson leading SOYLA with 12 points.


Murphy played his entire professional career for the Houston Rockets, from 1970 to 1983


Prior to 1992, the Houston Rockets were known as the San Diego Rockets.


Tied at 45-all in regulation, St John’s edged out Trinity 51-49 with Justine Winslow scoring 34 points for St. John’s.


He was quoted after the game:


"You hear the hype around the city about the game, but coach keeps us grounded. We approached it like a regular game. We just wanted to win. If I would have had two points and we won, I would be happy. I just want to put my team in the best position to win."

For Trinity, Myles Turner has 16 points and seven rebounds.


He is ranked number two in the current ESPN rankings.

Moses Malone played for nine different professional teams, including the Houston Rockets from 1976-1982.