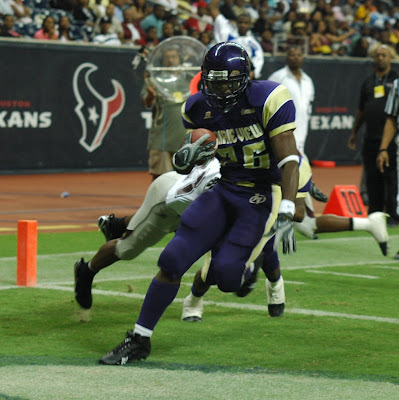 Running back Calvin Harris scores with 8:33 left in the third quarter to lead Prairie View A & M to a 34-14 win over Texas Southern. (Photo by Darla Tamulitis-TexSport Publications).
By Robert H. Kelly

(HOUSTON, TEXAS, September 1, 2007) Based on an evenly balance passing and running attack, their defensive play, and 31 second half points, Prairie View A & M dismantled Texas Southern 34-14 in the season opener for both schools at Reliant Stadium.

The Panthers (1-0) came out from a 3-0 half time score and totally dominated the Tigers to win their third Labor Day Classic during Coach Henry Frazier’s tenure as head coach.

Turnovers also played a major part in the win, with the Panthers forcing five turnovers in the second half.

Panther free safety Anthony Beck found the end zone after intercepting a Tino Edgecombe passes, returning it 94-yard for the touchdown. Quarterback Chris Gibson also got into the scoring act with a touchdown of his own. He went 10 for 21, passing for 103 yards while rushing for 123 yard on 13 carries.

Gibson scored his touchdown on a 52-yard run to put the score at 10-0. Running back Calvin Harris also put points on the board as the result of a six yard run with 8:33 left in the 3rd quarter. His effort took the score to 17-0 in favor of the Panthers.

Prairie View increased its lead to 20-0 with a Brady Faggard field goal with 2:15 left tin the third quarter. Texas Southern then marched 60 yards in five plays to the Panthers 8 yard line on their next possession, but Beck picked off the first and goal pass to shut down the Tigers.

The Tigers finally got on the board with a 54-yard pass to wide receiver Bryan Wilson with 4:32 remaining in the game. They added another touchdown with 1:16 left in the game but they would not be enough to overcome the onslaught of the Panthers.

In 62 meetings between the two schools, Texas Southern holds the most victories (40) to Prairie View’s 21. One game has ended in a tie.

Texas Southern will now face Alabama State on the road while Prairie View travels to Los Angeles to meet North Carolina A & T. Both games are set for next Saturday.
Posted by TexSport Publications at 9/02/2007 12:42:00 AM